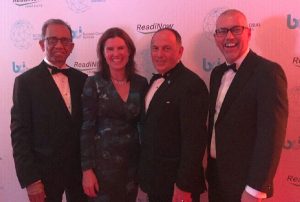 The highest honour granted by the BCI, the honorary fellowship has only been gifted to 26 others since its inception in 1994, and this is the first time it has been awarded to a New Zealander. Recipients must be nominated by their peers for the award.

With Erica also being a Principal Investigator with QuakeCoRE, New Zealand’s Centre of Research Excellence in earthquake resilience, it makes this honour quite special - demonstrating that New Zealand research is really helping organisations around the globe.

Business continuity and organisational resilience is a massive industry globally and the BCI has thousands of members from around the world. The award was presented at the BCI World Conference in London.

This year also marks the first time a New Zealander, Glenn Redstall of Inland Revenue, has been appointed to the global Board of BCI.